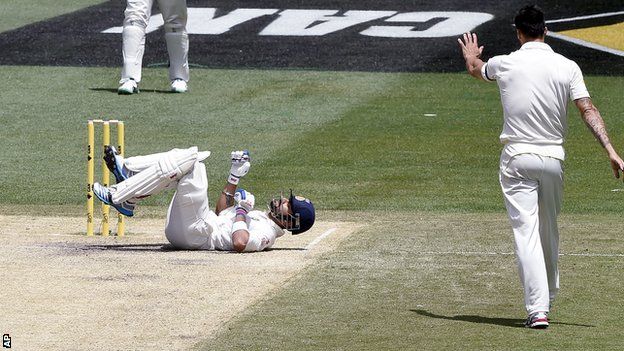 India batsman Virat Kohli says Australia’s players called him a “spoilt brat” and that he had “no reason to respect” Mitchell Johnson.

Kohli scored 169 on the third day of the third Test during which he and Johnson exchanged plenty of verbals.

“They were calling me a spoilt brat. I said, ‘maybe that’s the way I am – you guys hate me, and I like that’. It worked in my favour I guess,” he said.

Kohli has hit three centuries but India are 2-0 down in the four-match series.

“It was going on throughout the day,” Kohli added.

“I like playing against Australia because it is very hard for them to stay calm.

“I don’t mind an argument on the field. It really excites me and brings the best out of me so they don’t seem to be learning the lesson.”

At one point during the third day, Johnson hit Kohli with the ball when throwing it at the stumps off his own bowling.

“I was really annoyed with him hitting me with the ball. I told him that’s not on and to ‘try and hit the stumps next time, not my body’,” Kohli said.

“You have got to send the right message across. I am not there to take to some unnecessary words or chat from someone.”

Kohli, who put on 262 with Ajinkya Rahane, hit Johnson for three successive fours in one over as he helped India to 462-8 in reply to Australia’s first innings 530.

Johnson did take Kohli’s wicket with the final ball of the day but ended up with figures of 1-133 from 29.2 overs.

“I respect quite a few of them. But someone who does not respect me, I’ve got no reason to respect him,” Kohli said.

“I’ve got a nice sort of friendship with a few of them but someone who is not backing off and is saying anything that comes to mouth – I’ve got no reason to respect him.”

“We try not to say too much to him, but sometimes he brings it on himself I guess when he starts it,” Harris said. “It’s never personal, it’s always a bit of fun.

“It’s interesting to hear him say that. It’s probably a good thing. If he’s worrying about stuff like that, hopefully his batting goes down hill.”