Why did MS Dhoni go with David Hussey for the final over? That’s the question IPL fans will be asking after a gripping low-scoring encounter on a spinning Ranchi track went down to 10 off the final over. 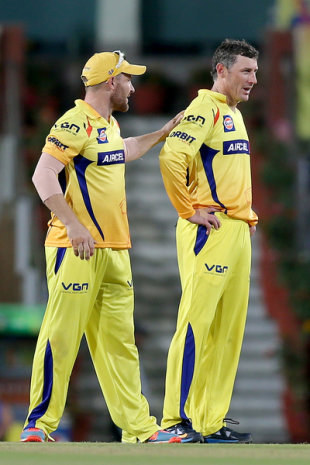 David HusseyThe ball was turning square, and Dhoni had three options: legspinner Samuel Badree, who had figures of 3-0-15-0, Mohit Sharma, who has been one of the standout bowlers of the tournament, and Hussey, who had no playing contract and was part of the IPL commentary team till last week. This was also Hussey’s first game since March, he has bowled more than one over only once in his previous 14 Twenty20 matches, and had conceded 25 in his two overs on the day. Still, Dhoni went with Hussey, perhaps wanting the ball to turn away from the main remaining threat, Yuvraj Singh. Dhoni has famously made unconventional bowling choices towards the end of an innings to conjure victories, but this was not one of those occasions. Yuvraj mowed the first ball over wide long-on for six, and the game was effectively over. With four needed off five deliveries, it was too little for Super Kings to play with. Abu Nechim clubbed a boundary to long-on to complete the game off the penultimate delivery. Despite making only 138, Super Kings looked to be in control of the game for most of the chase. R Ashwin was outstanding with the new ball, giving away only three in three overs as he repeatedly made Chris Gayle look clueless. He would have sealed the game in the 15th over had he pouched an overhead chance off AB de Villiers at extra cover. De Villiers was yet to get off the mark then, and the asking-rate was over 10 – perhaps par for the course for Twenty20s, but incredibly tough on this surface. On a track where even Gayle and Virat Kohli struggled to get the ball away, de Villiers was at ease, pummelling the ball to all parts as he scored at a strike-rate of 200. Three sixes in successive overs had brought the asking-rate down to a run-a-ball, but de Villiers went for another big hit in the 18th to perish and leave Yuvraj the job of hitting 14 off the final two overs.
YUVRAJ’S DRAMA There was drama as Yuvraj missed three deliveries from Ravindra Jadeja in the 19th, to leave 10 for the final over. Hussey was given the responsibility, but he couldn’t pull it off. He hadn’t looked at ease with the bat either, after coming in following a rare early fall of Super Kings’ openers. Suresh Raina and Hussey, however, put on 75 for the third wicket as Super Kings seemed set for their patented formula of bludgeoning the bowling in the second half. Though Raina went on to make 62, there was to be no bludgeoning as first the spinners Muttiah Muralitharan and Yuzvendra Chahal stifled the batsmen, before Abu Nechim and Mitchell Starc did the same at the death. Dhoni, dismissed only once in his previous seven innings, fell for 7, and there were no boundaries in the final four overs as Starc and Nechim profited by bowling a full length. The result isn’t too much of a blow for Super Kings, who are still almost certain of making the playoffs, but was huge for Royal Challengers as it kept them alive and hoping.