The former India captain has consented to be part of the IPL corruption probe.

Sourav Ganguly will join the Mukul Mudgal-led committee that is probing allegations of corruption in the Indian Premier League, including the investigation of 13 individuals listed in a sealed envelope that was given to the Supreme Court after a preliminary inquiry. 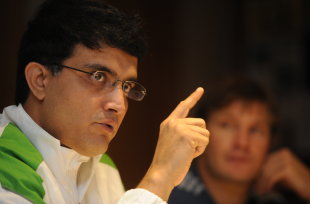 Sourav Ganguly during a board meeting presenting his ideas.

“We had requested Sourav Ganguly to join the IPL probe panel and he has agreed to join us in the investigations. I had telephoned Sourav and he confirmed about coming on board,” Mudgal told PTI. “Since our committee member L Nageswara Rao was not present today, we couldn’t fix the date of our next meeting. We will let you know when the committee meets next.”

The Mudgal committee was set up by the court in October last year to investigate the fixing allegations that arose during the IPL’s 2013 season. It had submitted its findings in February this year in a report that included a sealed envelope – to be seen only by the judges – with the names of 13 people who, the committee said, should be further investigated.

The court asked the committee to continue its investigation of the individuals named in the sealed envelope and the committee was also given greater powers for its probe. In agreeing to continue the investigation, Justice Mudgal had listed specific organisations and individuals whose assistance he would require, which included a former India cricketer “of repute and integrity”.

The committee, which is being assisted by former senior Indian Police Service (IPS) officer BB Mishra, has been given all investigative powers, including search and seizure of relevant documents and recording evidence. However, it cannot carry out any arrests. The committee will also be provided with assistance from one senior police officer each from Mumbai, Chennai and Delhi, as requested and is expected to submit its report in a sealed envelope by the end of August.

The case dates back to June 2013, when the Cricket Association of Bihar (CAB) secretary Aditya Verma raised charges of a conflict of interest in BCCI’s original two-member inquiry panel for the IPL corruption issue. A Bombay High Court ruling later termed the probe panel “illegal”. The BCCI and the CAB filed petitions in the Supreme Court against this order, with the CAB contending that the Bombay High Court could have suggested a fresh mechanism to look into the corruption allegations.

The Supreme Court then appointed a three-member committee, headed by former High Court judge Mukul Mudgal and comprising additional solicitor general L Nageswara Rao and Nilay Dutta to conduct an independent inquiry into the allegations of corruption against Srinivasan’s son-in-law Gurunath Meiyappan, India Cements, and Rajasthan Royals team owner Jaipur IPL Cricket Private Ltd, as well as with the larger mandate of allegations around betting and spot-fixing in IPL matches and the involvement of players.