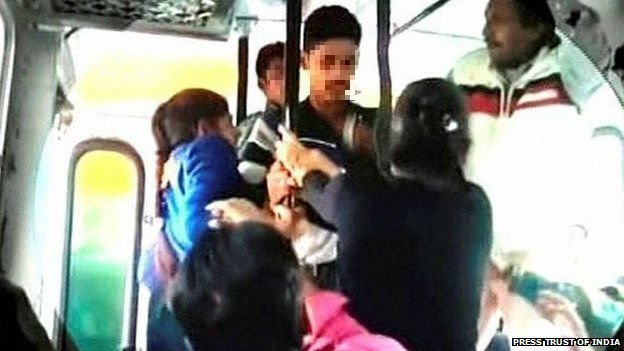 A video of two sisters beating up three men, who were allegedly sexually harassing them on a moving bus in India, has gone viral on social media.

The men have been arrested and charged with assault, police said.

Friday’s incident, recorded by a passenger on a mobile phone, took place in the northern state of Haryana.

Violence against Indian women has been in the spotlight since the gang rape and murder of a student on a bus in the capital, Delhi, in December 2012.

The latest incident happened in Rohtak district when the two students, 22-year-old Aarti and 19-year-old Pooja, were on their way home.

Younger sister Pooja told BBC Hindi that the three young men “threatened us and abused us”.

“The men started to abuse me and touch me. I told them ‘if you touch me again, you’ll get beaten up’. They called a friend on the phone and told him to ‘come over because we have to beat up some girls’,” Pooja said.

She said they decided to take on the attackers when other passengers did not come to their help.

“No one came forward in the bus to help us. So we took out our belts in self-defence [and hit the men]. If only the other passengers had helped us, we would not have needed to retaliate in this way,” she said.

However, the video of the incident shows at least one male passenger repeatedly trying to separate one of the men from the women.

The sisters said the men pushed them out of the bus when it came to a halt after some distance and attacked them again.

They said they retaliated by throwing a brick at the men who then fled.

Police say they received a call from the women on Friday afternoon, and the three men were arrested on Sunday evening.

Senior police official S Anand told The Hindu newspaper that they were contemplating action against the bus driver and his helper.

“The driver was supposed to take the bus to the nearest police station. But he did not do so. The conductor also did not intervene. We are considering legal action against them,” he said.

Correspondents say public abuse of women – called “Eve teasing” in India – is rampant in parts of the country.

“Eve teasing” often makes life miserable and even dangerous for women when they go out in public.

Meanwhile, the sisters have received much support on social media and many have been tweeting to praise the #RohtakBravehearts.