Robin Uthappa was little more than a spectator for eight overs. Royal Challengers displayed the intent of a side fighting for survival. Three of the Knight Riders top order were in the hut just after the powerplay and Uthappa was 20 off 18. He finished an unbeaten 83 off 51 to confirm his team’s place in the playoffs by extending their unbeaten run to six matches. Royal Challengers’ loss meant they were out of the tournament. They did have the resources to threaten a target of 196. But they persisted with a misfiring Chris Gayle and endured another poor start. Yogesh Takawale, inducted in the XI to offset Gayle’s dot balls, looked scratchy early on and when he was becoming fluent, he perished. Sunil Narine’s script was near flawless against Virat Kohli, Yuvraj Singh – who made a brief fist of it when he swatted Umesh Yadav for 22 in the 16th over – and AB de Villiers to scupper any chance the visitors had. 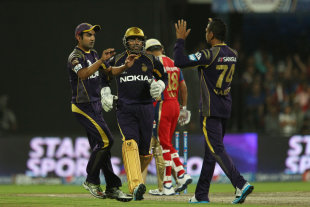 Narine took 4-20, taking his season tally to 20 wickets.The pitch had offered early evidence of stopping on the batsman a couple of times. Uthappa decided nudging around with Muttiah Muralitharan persuading his usual assistance was too risky and enacted a counterattack. Concise footwork added power to his straight hits. His indulgence in unorthodoxy went as far as sweeping and reverse sweeping, but more often than not he concentrating on guiding the ball into gaps with necessary angling of the bat. A caress to third man gave him the orange cap and his ninth 40-plus score ended up becoming his first unbeaten innings this season. Eden Gardens was rumbling, “Uthappa, Uthappa” as he drilled the final ball of the innings – a full toss on middle – into the sightscreen to reach his highest IPL score. Shakib Al Hasan was a brilliant deputy. Knight Riders were 56 for 3 in the eighth over when he joined Uthappa. The 121-run partnership took shape with singles and twos before Shakib, batting determinedly deep in his crease, brought out his bottom-handed swipes. The bowlers obliged by failing in their search for the blockhole and both batsmen began finding the boundaries with ease. When Yuzvendra Chahal was razed for 24 in the 15th over, with three towering sixes, Royal Challengers were rattled beyond recovery. They offered width, full tosses and bungled an easy run-out of Uthappa in the penultimate over to enable 78 of runs off the last six overs. Royal Challengers’ hopes were pinned to an 84-run stand between Kohli and Takawale. They needed to balance the construction of a springboard for their finishers with a run-rate that was persistently above 10. Rotating strike was not a problem and Vinay Kumar was carted for 17 runs in the ninth over to tempt their fans. However, with 26 runs and two wickets coming in the next four overs and 103 needed in the remaining seven, the dire need for big hits overcame the batsmen’s ability.