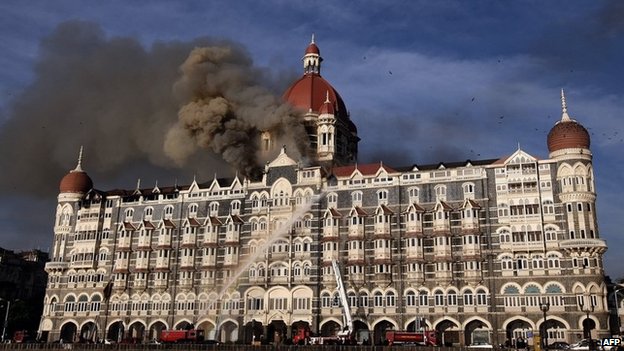 The attacks lasted almost 60 hours with militants killing several guests at the Taj Mahal Palace Hotel.
Pakistan is set to challenge the bail granted to a man accused of being behind the 2008 Mumbai terror attacks.

Zaki-ur-Rehman Lakhvi, one of seven men facing trial over the attacks in the Indian city, was granted bail by a court in Islamabad on Thursday.

Mr Lakhvi remains in custody for now, however, after Pakistani authorities issued a three-month detention order.

The attacks in Mumbai, which left 165 people dead, damaged peace efforts between India and Pakistan.

Mr Sharif’s comments followed the deadliest ever attack by the Taliban in Pakistan in which 141 people, mostly children, were killed at a school in Peshawar.

Correspondents said the decision to allow Mr Lakhvi bail was embarrassing for the Pakistani authorities, who are under pressure to bring suspects in the case to justice

Tagged under
Mumbai attacks 'mastermind' Pakistan appeal against bail for