Chennai Super Kings were making a chase of 227 look absurdly simple. Suresh Raina seemed to be batting in a trance that was slowing down time, and slowing down cricket-ball physics, as if he were a character in a dodgy, CGI-heavy action film. Raina was making Virender Sehwag’s 58-ball 122 from earlier in the day look like an everyday sort of innings. Super Kings were 100 for 2 after six overs. It was the highest Powerplay score in Twenty20 cricket. Raina was batting on 87 off 25 balls. The asking rate, which had been 11.35 at the start of the chase, was now 9.07. It looked as if only a run-out could end Raina’s eerie innings. And this was exactly what happened, following a smart piece of captaincy and an even smarter piece of fielding, both from George Bailey. Having brought on Karanveer Singh, the legspinner, and having brought the field in to deny Brendon McCullum the easy single, Bailey himself was called on to capitalise on the batsman’s over-eagerness to bring Raina back on strike. Bailey sprinted hard to his left, picked up the ball, transferred it to his throwing hand, and released a hard, flat throw, all this on the turn. The direct hit caught Raina well short. The throw broke the wicket, and broke the spell that Raina had cast over the game. The magnitude of the target dawned anew on Super Kings, and the magnitude of the total they were defending injected fresh belief into the Kings XI players. Having scored 100 in the first six overs, Super Kings could only manage 102 off the last 14, and even a customary last-ball six from MS Dhoni could no’t prevent defeat by    . 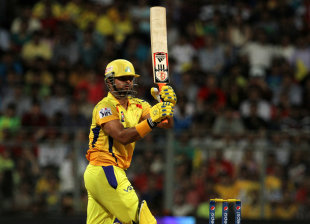 Raina found himself in the middle in the first over of the chase, after Mitchell Johnson had sent back Faf du Plessis with a short ball that had gotten big on him. As soon as he arrived, Raina seemed to be batting in a bubble. He tore into Sandeep Sharma in the second over, shredding him for three fours and a six through and over his favourite extra-cover and midwicket areas. Three fours and three sixes – the pick of them a pull over deep backward square leg off Johnson – followed in the next three overs, taking Raina to 55 off 18. He had reached his fifty in 16 balls, and become the second-quickest to the mark in the IPL, but he hadn’t even slipped into top gear. That happened in the sixth over, in which the unfortunate Parvinder Awana – went for 33, in a sequence that read 6, 6, 4, 4, 4 (no ball), 4, 4. It was crisp hitting all the way through, but two shots stood out: a six hit straight over the bowler’s head, effortlessly, with a perfectly straight bat and minimal follow-through, and a flick off his toes that screamed past midwicket for four.

With Super Kings’ bowlers feeding him a juicy, back-of-a-length diet interspersed with full-tosses (they bowled 17 in all), Sehwag raced along at a strike rate of over 200, outshining all of his teammates in the process. Manan Vohra only scored 34 out of an opening stand of 110, Glenn Maxwell 13 out of a second-wicket stand of 38 and David Miller 31 out of a third-wicket partnership of 63. When du Plessis took a difficult diving effort at extra cover to send back Sehwag, Kings XI were 211 for 3 with 11 balls to go. It was the third time in three matches this season that they had crossed 200 against Super Kings. For the third time, their batting firepower set them up for a comfortable victory. For six unreal overs, though, their total looked glaringly inadequate.