Murray, who has yet to drop a set through three rounds of his title defence, takes on 6ft 8in South African Kevin Anderson in the second match scheduled for Centre Court.

Anderson is at a career-high position of 18 in the world rankings and beat Murray for the loss of four games in their most recent meeting at the Montreal Masters in 2011.

Much has changed for both men since, however, with Britain’s Murray claiming his maiden grand slam title at the 2012 US Open and ending his country’s 77-year wait for a Wimbledon men’s singles champion 12 months ago.

The third seed confirmed his return to full fitness after back surgery with a run to the semi-finals of the French Open last month and has looked right at home on grass, brushing aside David Goffin, Blaz Rola and Roberto Bautista Agut so far.

Anderson’s run to the last 16 has not been quite as smooth; the 20th seed twice had to come from behind before finally seeing off Fabio Fognini in five sets in the third round.

Preceding the Murray-Anderson showdown on Centre is the women’s fourth-round match between Serena Williams’ conqueror Alize Cornet and one of the rising stars of the women’s game, Eugenie Bouchard.

The top seed in the men’s draw, Novak Djokovic, is up against Frenchman Jo-Wilfried Tsonga in the final match on Centre.

Djokovic leads the career head-to-head 12-5 and has not lost to the 14th-seeded Tsonga for four-and-a-half years, a run that includes a four-set victory in the Wimbledon semi-finals in 2011, the Serb’s title-winning year. 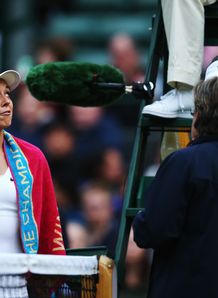 Sabine Lisicki and Ana Ivanovic will resume their third-round encounter on Court One at 1pm; 19th seed Lisicki – beaten finalist last year – was leading 6-4 1-1 when play was halted in fading light on Saturday evening.

Dimitrov faces Argentina’s Leonardo Mayer in the fourth round and French Open champion Sharapova squares off with ninth seedAngelique Kerber.

Among those in action on the outside courts on Monday are Australian Open champion Stanislas Wawrinka and 2011 Wimbledon winner Petra Kvitova.