It’s already been a World Cup in which big names have delivered and new heroes have emerged. Adam Bate picks out some of the star performers from the group stages of the tournament…

It’s no surprise to see Lionel Messi alongside Thomas Muller and Neymar at the top of the goal charts after the World Cup group stages, but elsewhere there have been unexpected results and unlikely heroes.

This line-up includes players from eight different countries with a further six represented among the honourable mentions. Don’t be shocked to see England players missing from the list… 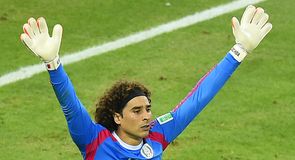 There have been times at this World Cup when it’s felt like Ochoa’s agent has been behind the scenes prompting the commentators, such is the amount we’ve heard about how the Mexico goalkeeper is out of contract this summer. His group stage efforts have certainly caught the eye as Ochoa followed up his clean sheet against Cameroon with a wonderful display against Brazil. With the eyes of the world on Fortaleza, Ochoa pulled off the save of the tournament to deny Neymar. While that was a one-off, it was also typical of his World Cup so far. 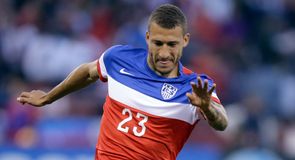 There were several fine full-back performances in Group G but not necessarily from predictable sources. With Portugal’s Fabio Coentrao injured early on and Germany fielding only one specialist but putting him in midfield, it was left to Ghana’s Harrison Afful and United States right-back Johnson to get the plaudits. US qualification owed much to the collective rather than any individual and yet Johnson’s energy levels were particular astonishing. His lung-busting run to win the corner that led to John Brooks’ dramatic winner against typified his team’s spirit. 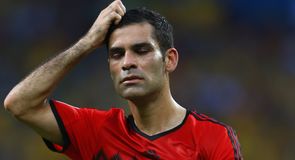 The former Barcelona defender is now back in his homeland playing for Leon after a stint at New York Red Bulls. When you’re in your post-MLS career it’s easy to assume the show has gone on too long but Marquez’s pace has not been an issue in Mexico’s back-three. In fact, we’ve seen the best of the central defender in Brazil. Far more than the mere neat and tidy type, Marquez has been the team’s playmaker from deep. Captaining his country at a fourth World Cup, he’s even scored at a third tournament in a row – the opener against Croatia. Still a class act. 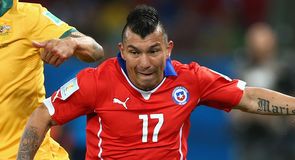 The presence of a Cardiff midfielder among the defence in a World Cup best of XI might seem unlikely but in the case of Medel it’s thoroughly deserved. Chile’s whirling dervishes have needed a rock at the back and that’s been provided by the Pitbull. He’s not the tallest but he is a fierce competitor and was impressive against Australia before really shining in the win over Spain. Diego Costa had no answer. Medel ranks among the top 10 at this World Cup for passes, accurate long balls and clearances. It’s been some effort. Blind arrived with a growing reputation, but having only made his international debut last year this has already proven to be a huge month in his career. The Ajax player helped illuminate the opening weekend of the World Cup with a supreme playmaking performance from wing-back. Blind provided the lofted through-ball that sliced open Spain defence for Robin van Persie’s sensational header, before putting Arjen Robben through for the second goal. Another assist has followed and Blind’s tactical versatility means he could fill numerous roles in this line-up. 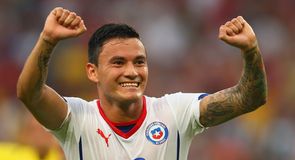 There are lots of stars in the Chile team with Arturo Vidal and Alexi Sanchez getting much of the attention, but Aranguiz is truly emblematic of their approach with his high pressing. The busy midfielder was the key to the win against holders Spain, harrying them to great effect and iducing an uncharacteristically uncomfortable performance from a high-class midfield. Aranguiz is more than a willing runner too. He’s an efficient passer, setting up the opener against Vicente del Bosque’s side before delivering the killer blow himself. France started this World Cup more convincingly than anyone. Indeed, Chile were the only other team to win their first two matches by two clear goals – France won them both by three. Matuidi was to the fore in those matches, proving anyone’s dream partner in midfield with his energy, pace and power. He’s made more passes than any France player and no team-mate has had more successful dribbles. There was even an excellent goal against Switzerland to hammer home the message – Matuidi is a midfielder that gives his team a bit of everything. 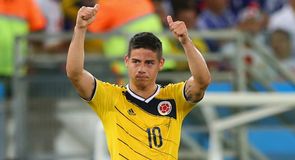 It’s tempting to suggest the Colombia playmaker has taken on the role of main man in Radamel Falcao’s absence, but there’s every chance he would have been the star of the show in Group C regardless. A significant creative force, he’s also scored goals too – netting in all three games, including a delicious effort against Japan having come off the bench. Lionel Messi is the only other player to notch in all three, while Karim Benzema is the only other man with multiple goals and assists. James turns 23 the day before the final and it might yet be a double celebration. 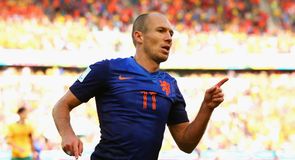 Robben is quite the curiosity. His enduring speed means he’s retained the key assets of his youth while adding the maturity and nous that comes with experience. It means he’s a doubly dangerous adversary and goes some way to explaining his devastating impact against Spain in which he scored twice. Robben followed up with another against Australia but perhaps his most impressive turn was the run and cut-back for Memphis Depay to see off Chile. For a player mocked for being so one-footed, he’s now close to being the complete player. The great man has made mockery of the old line “if Messi did that we’d be raving about it” by finishing as the joint top scorer in the group stage without anyone suggesting he’s at his best. Even third gear leaves the rest trailing. There was the brilliant skill to score against Bosnia and Herzegovina, the decisive strike versus Iran and then the double to down Nigeria – including one of only two direct free-kicks so far in the tournament. Messi ranks in the top 10 at this World Cup for dribbles, key passes, shots and through-balls. Let it not be said he hasn’t turned up. 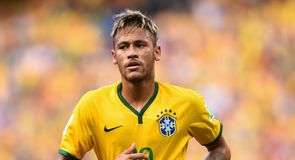 Others might have wilted under the pressure but Neymar appears to have thrived on his status as Brazil’s go-to man on home turf. It’s hardly the most creative of Brazil line-ups but the 22-year-old has succeeded in providing enough flair for everyone. There was the brace on opening night that set the tone for the tournament then two more against Cameroon – one finish a picture of delicacy, the other whipped past the keeper with bad intentions. And all done with the knowledge that the job isn’t even half done for Brazil’s golden boy.